Fiji Airways starts flying as a oneworld connect partner from today (Wednesday 5 December) – as the first airline globally to link up to the world’s premier alliance via this new membership platform.

Fiji Airways is now starting to display the new oneworld connect branding on its aircraft fuselages by the main passenger doors, on signage at airports and on other many other items of stationery and marketing collateral.

The first Fiji Airways aircraft to feature the oneworld connect logo is its initial Boeing 737 MAX 8, which has just touched down at its Nadi hub after its delivery flight from the manufacturer’s Seattle base.  Four more of these state-of-the-art twinjets will follow in the year ahead as replacement for older 737s flying on the airline’s short and mediumhaul network to destinations including Australia, New Zealand, Hawaii and neighbouring Pacific Islands.  Fiji Airways is the first airline in the region to operate this modern aircraft type.

Most of these additional benefits are available from today between Fiji Airways and three of its sponsors – British Airways, Cathay Pacific and Qantas – although some elements will be phased in during the coming weeks.  For details, see the table below.

They are all expected to be available between Fiji Airways and its other sponsor, American Airlines, from late in the first quarter of 2019, on a date to be announced in due course.

oneworld’s regular range of services and benefits remain in place for customers flying with the alliance’s full member airlines and their affiliates.

oneworld connect was unveiled in June as the alliance’s first new membership platform since it was originally announced 20 years ago – with Fiji Airways revealed at the same time as oneworld connect’s debut partner.

oneworld is continuing discussions with other carriers interested in participating in the programme, from various parts of the world including the Americas, Asia-Pacific and Europe.  Each oneworld connect partner will need to have a minimum of three oneworld members as its sponsors to be initiated into the programme. 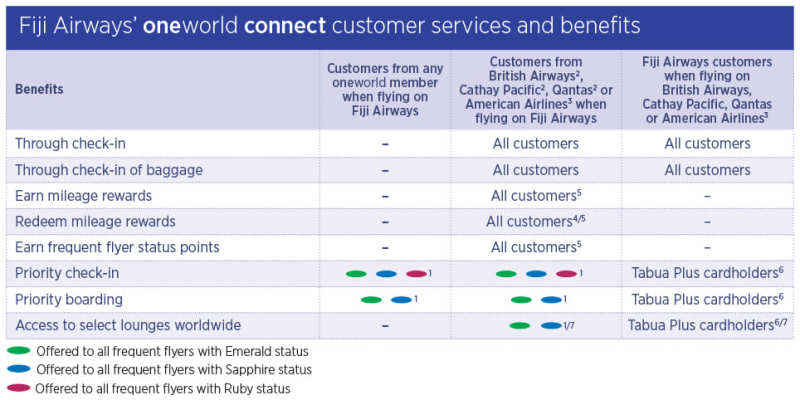 oneworld CEO Rob Gurney added: “oneworld is very pleased to welcome Fiji Airways on board as our first oneworld connect partner, making it easier and more rewarding than ever for South Pacific islanders to reach virtually anywhere globally – and for visitors from all around the world to travel to this enchanting and captivating region.  The addition of another high quality airline to our alliance builds further on oneworld’s position of alliance leadership across the Pacific.”

Fiji Airways CEO Andre Viljoen stated: “Fiji Airways is thrilled and honoured to be the first oneworld connect partner globally.  We are delighted to link Fiji and the South Pacific to the world’s premier airline alliance and further deepen our relationships in particular with Qantas, American Airlines, British Airways and Cathay Pacific.  This important step for our airline enables us to offer more services and benefits to our own customers along with the others in the oneworld family, to achieve a greater presence for our airline internationally and to build on the in-bound tourism that is so vital to our home nation and our region.”

Fiji Airways is the flag carrier of Fiji.  It serves 21 destinations in 13 countries and territories, including oneworld hubs Sydney, Hong Kong, Los Angeles and Tokyo.

Fiji Airways’ inclusion in oneworld will add seven territories – its Fiji home and the neighbouring South Pacific nations of Kiribati, Solomon Islands, Tonga, Tuvalu, Vanuatu and Samoa – and a total of nine airports to the alliance’s map, strengthening oneworld’s position as the leading alliance serving the South Pacific.  Fiji Airways’ network was already covered by oneworld Explorer, the round-the-world fare offered by all oneworld members and select airlines outside the alliance.

The group operates a fleet of 18 aircraft, including five Airbus A330s (with a sixth joining the fleet shortly), five next generation Boeing 737s.  It will be the first airline in the region to receive and operate brand new 737 MAX 8, to fly on its short and medium haul routes from December, offering an excellent cabin experience with modern in-flight amenities for guests.  They will be delivered complete with the distinctive oneworld connect logo by their main passenger doors.  Fiji Airways offers a two-class Business and Economy product on most international routes, including seats that convert to angle lie-flat beds.

In 2017, the airline boarded 1.6 million customers, generating revenues of US$ 452 million and achieving profits of US$ 44 million at the operating level and US$ 38 million net.  It employs more than 1,300 people.  Founded in 1951, it is 51 per cent owned by the state of Fiji, with Qantas holding 46 per cent.  Its remaining shares are held mainly by the Governments of Samoa, Tonga, Kiribati and Nauru.

oneworld member airlines work together to deliver consistently a superior, seamless travel experience, with special privileges and rewards for frequent flyers, including earning and redeeming miles and points across the entire alliance network.  Top tier cardholders (Emerald and Sapphire) enjoy access to more than 650 airport lounges and are offered extra baggage allowances. The most regular travellers (Emerald) can also use fast track security lanes at select airports.

oneworld is the “most highly prized alliance” as current holder of: